About the Railworks Simulator 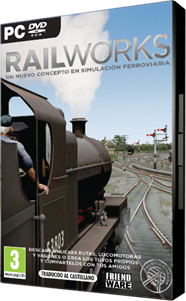 RailWorks is a computer program that uses a model of physics and 3D graphics to create a virtual model railway. To create such a model the program provides an editor view of the world, in which you can raise and lower the ground height, place things - assets - where you wish, and lay track and roads - called lofts - to build up the required model.

Provided with the program are several routes from which you can reuse assets, as well as many generic assets, intended to be representative of common items such as platforms rather than be a specific model: in Model Railways terms, this is akin to the Hornby standard platform models compared to a Scratchbuilt one. Nevertheless such items are frequently useful.

Where you need a specific asset, whether that is a platform nameboard, a unique building, or a new engine, you must delve into the realms of Computer 3D Modelling, or ask someone else to do so. The standard RailWorks program - that is, the one the supplier uses - is 3D Studio Max, but there are two others: 3D Crafter Pro and Blender. All are perfectly usable though with their own quirks. To build a model you create the outline, or geometry, and then apply a picture to that outline to represent the appearance. So a Wall might be a simple rectangular cube, geometry-wise, with the faces “painted” with a picture of bricks.

Modelling rolling stock adds to the above by requiring animation - for example, wheels turning, and also interaction with the game, for example a wagon must be able to couple and uncouple, to be filled or be empty. Once the model is made, it must be imported and described to the simulator, and interactions then get programmed as well. Should sounds be involved - whether the rip of a saw blade or the chuff of steam, sounds are recorded and then attached to events that trigger playback.

The final part of the mix is creating scenarios. This is a defined set of rolling stock that move in accordance to instructions: pick up passengers, drop off wagons in siding. Currently, such instructions must be very precise and are quite limited, but the community hopes that will change! There is also frequently a player train that can be driven while the others are moving about.